During the course of the closed beta discussions emerged regarding the size of hitboxes in Brick-Force. In shooter games like Brick-Force, the terms "hitbox" and/or "hitboxes" are used to describe invisible areas which impact players when struck. The visual representation below shows the hitboxes (Arms, Brain, Body, Head, and Legs) in Brick-Force. Headshots make the strongest impacts, and skilled players know that they have a higher chance of landing headshots by aiming for the center of the opposing player's head. While hitting the brain can be challenging, it will always guarantee a brickshot. 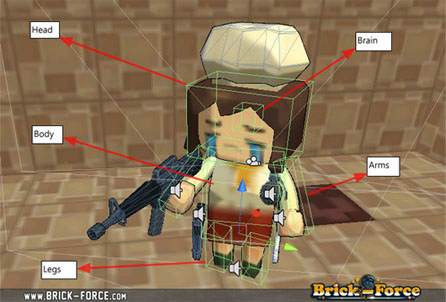